In his Descriptive Catalogue of 1809, Blake writes of having been taken in vision to see the "stupendous originals" that lie behind later art


Those wonderful originals seen in my visions, some of them one hundred feet in height; some painted as pictures, and some carved as basso relievos, and some as groupes of statues, all containing mythological and recondite meaning, where more is meant than meets the eye. (5) 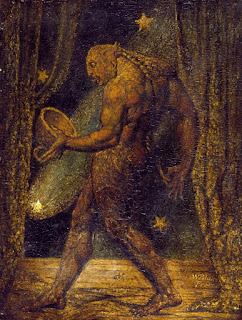 The formal composition of settings of a poet provides an interesting measure of the reputation of a poet and the reception history of his oeuvre. Musicians, not just critics, are influenced by literary fashion. For example, Robert Bloomfield’s work was granted musical setting almost from publication of The Farmer's Boy in 1800. The fashion for Bloomfield (1766-1823) was transitory, though intense enough while it lasted, and the vast majority of these compositions were written within Bloomfield’s lifetime.  In contrast, his near contemporary, William Blake (1757-1827), had to wait until 1863 for the first known composed setting of his words (“Chimney Sweeper’s Song”, by T. L. Hately).  Today, Blake is probably approaching Burns as the most set English-language poet after Shakespeare, whereas Bloomfield’s settings remain few.

A comprehensive list of Blakean musical settings to the late 1980s is given in Donald Fitch’s Blake Set to Music (1990), which documents the use of Blake’s poetry and prose by composers, identifying 1,412 musical settings from the 1870s through 1989.