Drive your cart and your plow over the bones of the dead.—BLAKE. 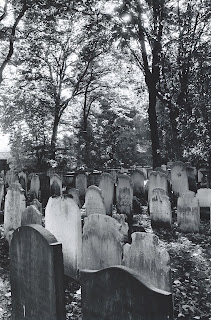 The Bunhill Fields Burial Ground and the adjacent Artillery Ground are the last large open spaces remaining of the three great fields (Bunhill Fields, Smithfield, and Moorfields) that constituted the Manor of Finsbury. The name Bunhill is a corruption of “Bone Hill”, perhaps implying the presence somewhere on the land of a Saxon burial mound. Another suggestion is that the marshy field was used as a refuse tip—a dumping ground for rags and bones, including animal bones from the Smithfield shambles, but I think the name predates the establishment of the livestock market. The manor was originally the prebend of Halliwell and Finsbury, established in 1104 to provide support for a canon of St Paul’s Cathedral.

In 1315, in the reign of Edward II, the prebendary manor was granted by Robert Baldock, the king’s secretary, to the Mayor and commonalty of London. This act enabled more general public access to a large area of fen or moor stretching from the City of London’s boundary (London Wall), to the village of Hoxton. Though ownership of Bunhill Fields reverted to the Dean and Chapter of St. Paul’s Cathedral from 1514 to 1867, it continued to be leased and managed by the Corporation of London. The Corporation in turn sublet the field. This pattern of lease and sub-lease (and often sub-sub lease) was customary with Corporation land and persists to this day.