This “bio-bibliography”—a chronology of principal events in Malkin’s life and incorporating a list of his publications—was prepared many years ago for an abortive web project. It is presented here with additions and amendments, but remains a work in progress.

Benjamin Heath Malkin, antiquary and author, born in London in 1769, was headmaster of King Edward's School, Bury St Edmunds for many years, and later, more briefly, Professor of History at London University. He lived part of each year in Cowbridge, his wife’s home in the Vale of Glamorgan, from where he pursued his interests in local history and topography, and died there in 1842.

G.E. Bentley Jr. suggests that Malkin made the acquaintance of William Blake in 1803, soon after Blake returned to London from his three years in Felpham. But it is also possible that the two men were previously acquainted through the publisher Joseph Johnson for whom Blake had worked. William Godwin reports meeting Malkin at dinner at Horne Tooke’s in 1796 and 1797 and at Fuseli’s Milton Gallery in 1800, which suggests that Blake and Malkin may have shared some political and artistic sympathies. Malkin also lived close to Blake’s patron Thomas Butts in Hackney, and knew George Cumberland, another friend.
Read more »
Posted by Keri at 10:09 No comments:

Mary Ann Linnell, wife to John Linnell and mother-in-law to Samuel Palmer, recalled in a letter of 1839 that “Mr Blake … used to say how much he preferred a cat to a dog as a companion because she was so much more quiet in her expression of attachment”.

It was perhaps in vague recollection of Mrs Linnell’s words that Tim Heath, two weeks ago, just before the Blake Society Zoom meeting, asked me if the Blakes, Catherine and William, ever had a cat. The answer is yes.

The Blakes moved to a cottage at Felpham in Sussex in September 1800 where Blake could work under the often burdensome patronage of the wealthy writer William Hayley. There he made the acquaintance of Hayley’s friend John Marsh (1752-1828) of Chichester, attorney, musician, prolific gentleman composer (thirty-nine symphonies), and diarist. Marsh recorded most of his long life in minute detail, in a journal that survives in thirty-seven volumes at the Huntington Library, San Marino, California.

In his Journal for 5 April 1802, Marsh wrote: “On Monday the 5th our white Cat produced 4 white Kittens, one of which we saved for Mr Blake of Felpham (Mr Hayley’s friend) but had great difficulty in rearing it, the Cat seeming to have very little Milk—”, and then repeated in his marginal summary: “Bred a White Kitten for Mr Blake”. It is pleasant to picture the white kitten playing with Catherine’s embroidery wool, or William, sitting quietly for once, dozing with a white kitten on his lap. (My understanding is that the gene that causes cats to have completely white fur is also linked to congenital hearing impairment. White cats with blue eyes are commonly deaf. One hopes that the Blakes’ white kitten escaped that disability.) Marsh’s journal also reports visits to Blake on 9th May and 26th June 1801, and gifts of white kittens to others in December 1801. Three years later, on 22th May 1805, he wrote again: “We drove to Felpham & carried our little white kitten to Mr Hayley”.

I have recently rediscovered notes that I made decades ago of the Keynes papers in Cambridge University Library. They will be of interest to a quite limited number of people, but perhaps contain hints for future blog postings.
When I visited Cambridge in 1992, my research interests were very much focused on William Muir (1846-1938), facsimilist, and the Blake Press at Edmonton. (Keynes had met Muir as well as purchasing some of his facsimiles through Quaritch, bookseller.) I was also acquainted with Ruth Lockwood (1914-2004), formerly Ruth Jasper, who had been Keynes’s theatre sister at Barts, so there was an additional sentimental interest.
In 1992, the contents were still in the corrugated cardboard boxes presumably used to move them from Lammas House, the Keynes residence near Newmarket. It looked to me like the family had just popped round to the Newmarket Tesco for any spare grocery boxes. 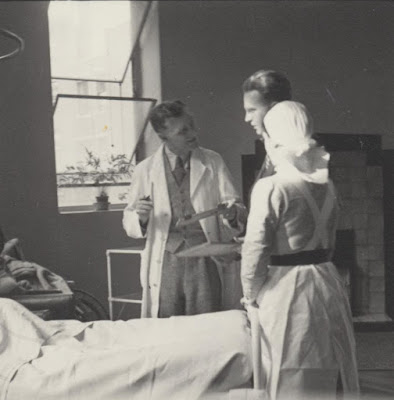 Geoffrey Keynes, Donald Fraser and a staff nurse (probably Ruth Jasper), c. 1935.The group are pictured at the foot of a patient's bed (patient not visible) in an unidentified ward.
(Barts Archive, Photograph Collection: SBHX8/1757.)
Read more »
Posted by Keri at 16:07 No comments: 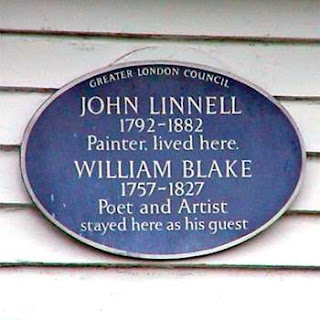 “Old Wyldes”, North End, where the painter John Linnell played host to William Blake, is an early 17th-century house on the edge of Hampstead Heath. Though the present house was probably built soon after 1600, the estate of which it was the farmhouse was very much older, dating back to medieval times when it had been under monastic control. Wyldes was the medieval name of the estate, a name that was revived at the end of the 19th century. In Blake’s day it was known as Collins Farm.

The Collinses, father and son (and both called John) had been farming Wyldes since 1793. John Collins, the younger, was a small scale dairy farmer, owning 16 cows which grazed on the heath. He also sold strawberries, apples, currants and fresh water at a penny farthing a pail from one of the wells near the house. It is said that “J. Collins cow Keeper & Dairyman North End” can still be seen scratched on the window of his kitchen.

The Chamber on the Wall

8 And it fell on a day, that Elisha passed to Shunem, where was a great woman; and she constrained him to eat bread. And so it was, that as oft as he passed by, he turned in thither to eat bread.
9 And she said unto her husband, Behold now, I perceive that this is an holy man of God, which passeth by us continually.
10 Let us make a little chamber, I pray thee, on the wall; and let us set for him there a bed, and a table, and a stool, and a candlestick: and it shall be, when he cometh to us, that he shall turn in thither.
11 And it fell on a day, that he came thither, and he turned into the chamber, and lay there.

My friend Bill Goldman died aged 70 in May this year. I have taken far longer to write these notes than I intended thanks to my continuing post-Covid 19 fatigue. I apologise now for any errors, omissions, infelicitous expressions or, indeed, lapses of tone in what follows.

William David “Bill” Goldman, Blake scholar, was born in 1950 in St Pancras, London, the first child and only son (there are two younger sisters) of Joan and William Goldman. Bill’s father, Willy, born 1910 in Mile End Old Town, was a significant memorialist of the Jewish East End. Willy Goldman married as his third wife, Mavis Joan Allsop, in St Pancras, London, in 1950.

Bill entered Sir William Borlase Grammar School in 1960, a good grammar school in Marlow, Buckinghamshire. He left aged 16 with 7 GCEs and one O/A level (Use of English, A-grade) to work for BBC Publications, sorting and delivering office mail. By 1970 he had acquired the qualifications for university entrance and went to the University of Essex to study English Literature. Bill dropped out after two years. I don’t recall him ever speaking about the period following except that it led to his religious conversion around about 1977, of which he wrote “I met Jesus my Saviour and acknowledged Him as such … I love the Bible and regard it as God’s Word as it claims to be”. (To me, this kind of talk is close to meaningless. If the Bible is God’s word, then God is a really crap mathematician. See 1 KINGS 7:23.) I can see that conversion gave Bill’s life a stability it might otherwise have lacked but I think it also made him vulnerable to the Christian flat-earthists, worshippers of Blake’s “old Nobodaddy aloft”, who were/are a feature of the Richmond church he joined.
Read more »
Posted by Keri at 14:22 No comments:

On 29 November 2019, and coinciding with the Blake exhibition at Tate Britain, I attended “William Blake and the Idea of the Artist”, a conference at the Paul Mellon Centre in Bedford Square. The conference sought to “consider the work of William Blake with the context of Romanticism and the artistic currents of his times, the creative legacies of his work and the contemporary resonances of Blake’s vision”.

The first speaker, Silvia Riccardi (University of Freiburg), drawing attention to the interlinear squiggles and elaborations of the lettering in, for example, America, made one want to go back to the works in illuminated printing again, and this time take a magnifying glass. The speakers that followed all made similarly thoughtful contributions. But the final speaker, Dave Beech (University of the Arts, London) left me puzzled.

If I understood his argument, Beech claimed there was an eighteenth-century class distinction between “artisans”, like Blake, who had undergone an apprenticeship, and “artists”, who attended academies. Perhaps it would be anachronistic to point out that Raphael, for example, was apprenticed to Perugino; but surely not anachronistic to note that Sir Joshua Reynolds served an apprenticeship with the fashionable London portrait painter Thomas Hudson. At the age of 10 Blake was drawing from casts of antiquities in the school of Henry Pars, before his apprenticeship to James Basire in 1772. After 1779 Blake was a student at the Royal Academy, where he diligently drew from classical sculpture under the instruction of George Moser.