Donald Fitch, writing in 1990, suggested that


[t]he earliest person to suggest a Blake text for music was apparently … the Unitarian minister James Martineau, who, in about 1874 proposed the text “Can I see another’s woe” for use as a hymn; two years later Doyne Courtenay Bell made the first art-song setting of this text (xxi).

For many years this latter work

remained the earliest known setting. But it now appears that the first published musical setting for any work by Blake (though slightly adjusted as to wording) is “Chimney Sweeper’s Song” (from Innocence), on pages 128-129 of The Illustrated Book of Songs for Children (London, etc., 1863). The composer is Thomas Legerwood Hately, not named on the title-page, but who, as noted in the preface, “has kindly provided a number of new airs, and revised the whole” (vi). 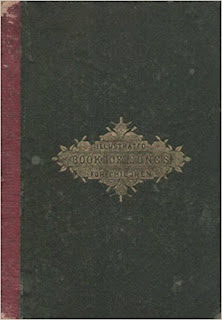 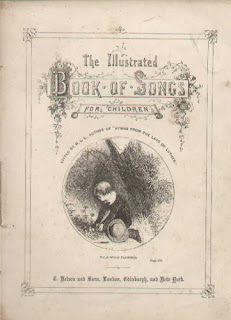 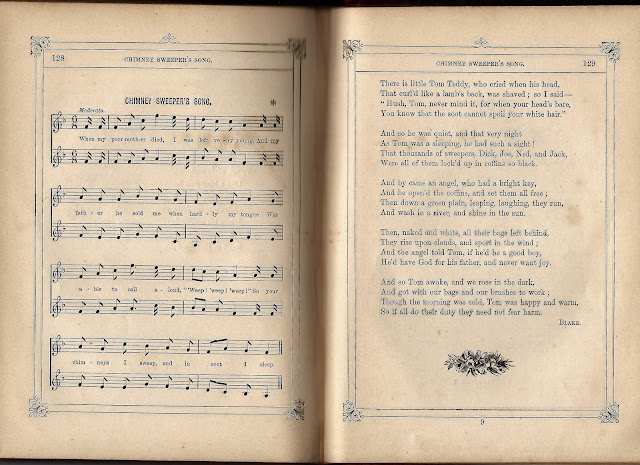 I illustrate above pages 128-29, containing Blake’s “The Chimney Sweeper” from Songs of Innocence with a musical score beneath which the first verse is printed. My friend Stuart Woollard has offered the following comments on the song


It’s a simple strophic setting, as you would expect and the expressed aim is to be easily memorable for children to sing. It’s quite a strong tune, in F major throughout, which leaps up the tonic chord at the start of each two-line stanza of the poem. The tune fits the words and the range of sentiments in the poem quite well. What I think lets it down is the two-part arrangement, following the tune mainly in thirds and sixths. This tune would, I think, lend itself to a more imaginative arrangement (e.g. for voice and piano, or a capella choir) in which subtleties of the text could be brought out with more adventurous use of harmony and colour and variations of tempo and dynamic. (Verse 2, for example might lend itself to a lullaby treatment, with a bright contrast in verse 3, etc).

Jane Borthwick was compiler and editor, and thus presumably responsible for the textual variants. The poem’s title has been changed to “Chimney Sweeper’s Song”, the word “left” added after “I was” in the first line, and there are other alterations in wording in the first and third verses. “Tom Dacre” is changed to “Tom Teddy” in the second verse. This suggests to me that her source for the poem is the Moravian hymnodist James Montgomery who included Blake’s “The Chimney Sweeper” in his The Chimney-Sweeper’s Friend and Climbing-Boy’s Album (1824). Montgomery too altered “Tom Dacre”, but to “Tom Toddy”, perhaps so as not to offend Lady Dacre’s Westminster Charity. (In view of Borthwick’s known interest in the Moravian Church, could there have been some personal acquaintanceship between Montgomery and her?)

There are a number of other nineteenth-century collections with the same title : The Illustrated Book of Songs for Children : London : J. A. Hessey, 1828; New York : Evans & Brittan, 1854; New York : Hurd & Houghton, 1860; New York : James G. Gregory, 1863. None of these contain any settings of verse by William Blake.

Jane Laurie Borthwick was born 9 April 9, 1813, in Edinburgh, into a Free Church family. She was one of four daughters of James Borthwick, insurance manager of the North British Insurance Office, and his wife Sarah Finlay. It was while Borthwick was residing for a time in Switzerland that her attention was drawn by Baron de Diesbach to the study of German hymns, and he suggested that she try translating them. After her return to Scotland, her father also encouraged that idea. Jane and her sister, Sarah Borthwick Findlater (1823-1907), worked over the next several years and eventually brought out four series of Hymns from the Land of Luther between 1854 and 1862. Jane Borthwick continued the task of hymn and verse translation in later books as well.

The four volumes of translated texts were attributed to “H.L.L.”, a pseudonym shared by the sisters. Jane Borthwick’s other books of poetry and original hymn texts as well as some books of religious instruction for children were also published as by H.L.L., since she preferred to preserve her anonymity. Borthwick was apparently quite unhappy when her real identity was revealed by hymn compiler Charles Rogers in Lyra Britannica, a Collection of British Hymns (1867).

In 1875, having returned to Switzerland, she produced another book of translations, Alpine Lyrics, the German poems of Meta Heusser-Schweitzer, later incorporated in the 1884 edition of Hymns from the Land of Luther.

Borthwick, who never married, was also active with the Edinburgh House of Refuge, the Moravian Mission in Labrador, and other mission work. She died on 7 September 1897 and is buried in Greyfriars Kirkyard. 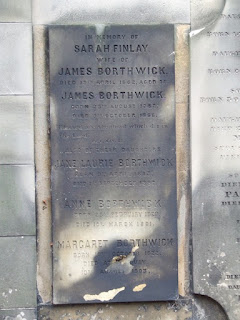 1854-1862.—Hymns from the land of Luther. Translated from the German.—4 series.—Edinburgh : W. P. Kennedy.
Includes “Jesus, still lead on”. This Borthwick translation of a text by Count Nicholas von Zinzendorf first appeared in The Free Church Magazine in 1846, and was slightly revised for the first volume of Hymns from the Land of Luther in 1854. The collection includes translations of other Moravian hymns.

1859.—Thoughts for thoughtful hours : in verse. By the author of “Hymns from the land of Luther”.—London, Edinburgh, New York : T. Nelson & Sons, Paternoster Row.
Translations and original poems that first appeared in the Family Treasury, a religious periodical.

1863.—The illustrated book of songs for children. Edited by H.L.L., author of “Hymns from the land of Luther”.—London, New York : T. Nelson & Sons.
With music (mostly unaccompanied melodies) supplied by T. L. Hately.

1863.—Lessons on the life of Christ for the little ones at home. By H.L.L., one of the authors of “Hymns from the land of Luther”.—London, Edinburgh, New York : T. Nelson & Sons.
In the form of conversations between a mother and her two children.

1863.—Thoughtful hours. By H. L. L., author (in part) of “Hymns from the land of Luther”; “The story of four centuries”; “Missionary evenings at home”, etc.—London, Edinburgh, New York : T. Nelson & Sons.
A collection of poems, some previously published in Thoughts for thoughtful hours.—1859.

1864.—The story of four centuries : sketches of early church history for youthful readers. By H. L. L., one of the authors of “Hymns from the land of Luther”, author of “Thoughtful hours”, etc.—London, Edinburgh, New York : T. Nelson & Sons.

1866.—Missionary evenings at home. By H. L. L., one of the authors of “Hymns from the land of Luther”. Author of “Thoughtful hours”, “The story of four centuries”, etc.—London, Edinburgh, New York : T. Nelson & Sons.

1868.—Pictures from Palestine; or, Fireside travels in the Holy Land. By H. L. L., author of “Hymns from the Land of Luther”.—London T. Nelson & Sons.

1873.—The story of Moravian missions in Greenland and Labrador. By H.L.L.—London : Nelson.

1874.—The souvenir : a daily text-book. Edited by H.L.L., author of “Thoughtful hours,” &c. &c.—London, Edinburgh, New York : T. Nelson & Sons.
Containing a text from the Bible and a verse of a hymn for each day of the year. One of several “text-books” following the Moravian model: The parents’ text book for little children.—1874; Words of comfort for days of trial.—1874; Evening thoughts.—1875; Morning thoughts.—1875; Rules for daily life.—1875; The Christian remembrancer.—1875; Light by the way.—1879; Daily thanks and praise.—1881; The Bible birthday book.—1885; The Imitation of Christ birthday book. With Scripture texts and selections from Thomas à Kempis.—1888; Birthday text book for the Christian year. Selections from the writings of Keble, with appropriate Scripture verse for every day.—1890.

1875.—Alpine Lyrics. A selection from the poems of Meta Heusser-Schweizer. Translated by H. L. L. one of the authors of “Hymns from the Land of Luther”. – London, Edinburgh : T. Nelson & Sons.

1883.—Lives of great missionaries. By the author of “Hymns from the land of Luther”.—6 vol.—London, Edinburgh, New York : Thomas Nelson & Sons.—New series of twopenny books
Contents: John Williams in the South Sea Islands—Vanderkemp and Moffat in South Africa—The Moravians in Greenland—Allen Gardiner in Tierra del Fuego—Eliot and Brainerd among the Red Indians—William Carey in India.

1885.—Stories of the Waldenses, by the author of ‘Hymns from the land of Luther’.—London &c.

1888.—Lyra Christiana. A treasury of sacred poetry. Selected and arranged by H. L. L., author of “Hymns from Land of Luther”.—London : T. Nelson & Sons.
A poem for each day of the year.

Thomas Legerwood Hately (1815-1867), was composer, arranger, and editor of the music in the collection.

Hately was born at Greenlaw, Berwickshire, 26 September 1815. He was apprenticed as a boy to Ballantyne & Company, a firm of printers, where he remained for 11 years. Among those to whom he carried proofs was Sir Walter Scott. Later worked for the printing firm of Thomas Constable, where he became a manager. Musically self-taught, although he came under the influence of Robert Archibald Smith while a member of Smith’s choir, St George’s, Edinburgh ; appointed precentor of North Leith Parish Church, 1836 ; of St Mary’s Church, Edinburgh, December 11, 1838.

Shortly afterwards came the events known as the Disruption, at which Hately was one of the few precentors to side with the dissidents. Afterwards appointed official precentor to the Free Church Assembly, he accepted in 1850 the precentorship of the Free High Church, Edinburgh, then under the pastorate of the Rev. Dr Gordon.

Hately worked to enliven the singing in the Free Church by composing new tunes and producing new collections of Psalm music. From 1846 he organised congregational singing practices and from 1850 he travelled through Scotland, training teachers and leading classes in church music as the representative of the Free Church Assembly.

1845.—The psalmody of the Free Church of Scotland : with an accompaniment for the pianoforte. Prepared under the superintendence of George Hogarth by T. L. Hately.—Edinburgh : Kennedy.
“Issued by authority of the Committee on Psalmody.”

1847.—The national psalmody : a selection of tunes for the use of churches, families, and schools. Prepared under the superintendence of George Hogarth, esq. With a short and easy practical guide to psalm-singing, by Thomas L. Hately, Precentor to the General Assembly of the Free Church of Scotland.—Edinburgh : John Johnstone, 15 Princes Street, Edinburgh; & 26 Paternoster Row, London, and sold by all the booksellers.
For chorus (SATB).

1853.—Melodies for the young. Parts 1, 2.—Edinburgh.
Hately was established as a composer of songs for children long before he worked with Jane Borthwick. There are no Blake settings.

1854.—The book of psalms and sacred harmonies.—Edinburgh.
With “Translations and paraphrases”. The harmonies edited by Thomas L. Hately.

1861.—The pilgrim songs, or, songs of degrees, paraphrastically versified by a lover of the songs of Zion. With selected music, adapted and harmonized by T.L. Hately.—London.—A Christian Choral Song.

1862.—Seann fhuinn nan salm mar tha iad air an seinn anns a’ ghaeltachd mu thuath: or, the old Gaelic psalm tunes, as sung in the congregations of the Free Church of Scotland in the North Highlands. Taken down by T.L. Hately ....—[Edinburgh?] issued by the authority of the Committee on Psalmody.
Unaccompanied melodies in staff notation.

1865.—The Illustrated book of nursery rhymes and songs : with music edited by T.L. Hately ; illustrations by Keeley Halswelle.—London ; New York : T. Nelson & Sons.
“... arranged in two parts, so that while the children sing the melody, the second part may be taken by mamma or nurse ...”--Pref. Would this also apply to his setting of “Chimney-Sweeper’s Song”?
No Blake.

Donald Fitch.—Blake Set to Music : a Bibliography of Musical Settings of the Poems and Prose Of William Blake.—Berkeley : University of California Press, 1990.
<APKD>

Robert N. Essick.—”Blake in the Marketplace, 1995, Including a Survey of Blakes in Private Ownership”, Blake/An Illustrated Quarterly, volume 29 issue 4 (Spring 1996).
Reports his acquisition of The Illustrated Book of Songs for Children (a gift from the bookdealer Justin Schiller) on page 120 and illustrates the setting of “Chimney Sweeper’s Song” as illus. 7

John Julian.—A dictionary of hymnology : setting forth the origin and history of Christian hymns of all ages and nations. Edited by John Julian.—2nd ed.—London : John Murray. 1957.