Walter Zimmermann was born in Schwabach, Franconia, on 15 April 1949. Alongside his career as a composer he has engaged in ethnological research, gathering folk music in Franconia but also (1975-6) from American Indian reservations. He has been Professor of Composition at the Berlin Academy of the Arts since 1993; he now lives in Berlin and Seidmar (Franconia).

Zimmermann's position is that of a resolute outsider within a culture based on common currents and continuities. And almost from the start, works with quite different instrumentation were organised into substantial Werkgruppe (“cycles” or “projects”). Thus, perhaps his best-known work, Lokale Musik (1977-81) is a collection of pieces (from solos and chamber music through to large orchestra), a project about the "manifold relationships between landscape and music", a private (autobiographical and psychological) and public (historical and social) working out of those relationships in a particular landscape, that of Zimmermann's native Franconia. Zimmermann presents us with, not just a remarkable body of music, but a model of composition as a project that connects the musical to the historical, ethnological, social and psychological, and one in which these connections are never musically trivial.

So far Zimmermann has written two works linked to Blake’s poetry: Songs of Innocence and Experience and The Echoing Green. Both I think respond to Blake in quite a profound way. 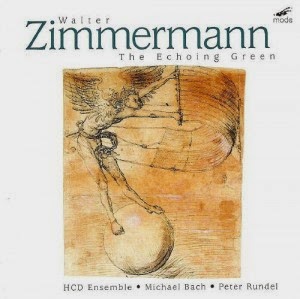 Samuel Beckett calls residua what is left over from larger original texts—simulated fragments, in which every little part provides an example of what one can find everywhere: erosion as a form-generating force. The second of the two duets of the cycle Residua is drawn from the children’s song “Ich bin das ganze Jahr vergnügt” (I am happy all year long) subjected to a process of echoing, a “broken unison” (both melodic and rhythmic), in which the violin's Pythagorean intonation becomes ever more incompatible with the piano's equally-tempered tuning. This clearly has an allegorical or social dimension as well as a musical one; perhaps we can suspect the presence here of the child Echo from Thomas Mann’s Doktor Faustus (and Zimmermann’s use of magic squares in this and other works also brings Mann's Adrian Leverkühn to mind).

The children’s song “Ich bin das ganze Jahr vergnügt” (I am happy all year long) serves as a basis for a process of transformation and dissolution, whereby it never emerges in its original form anywhere in the piece. Already, at its first statement at the opening of the piece, this very cheerful song is changed almost beyond recognition into a melancholic, barely concrete theme, as if it were a blurred memory of childhood. The texture of the children’s song distances itself by means of various transformational processes until it is forgotten. The “Sieve of Eratosthenes”, a mathematical procedure for establishing a chart of prime numbers, and the use of magic squares serves to transform the pitches of the song. By means of the musical form of the echo, the contours of the song are softened; and through use of the echo as reverberation between memory and forgetting, Beckett’s idea of the echo as “residua” is taken up. The idea of the echo can thus be considered from a literary-philosophical perspective. The four different movements correspond to musicalisations of the echo: In the first movement appoggiaturas and unison sounds create repercussions. The special sonic relationship of the piano in equal temperament and the violin in Pythagorean tuning is perceived as an intonation echo, especially in the second movement. Octave transpositions become echoes in the third movement. The alternation between arco and pizzicato playing in the violin part, as well as the occurring “quasi-unison” sounds, provide echo effects in the fourth movement, in which a new, painfully intensive melody develops from the worked out children’s song. 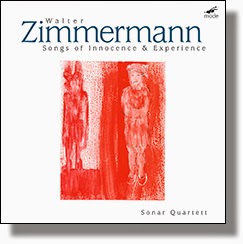 Songs of Innocence & Experience
21 Ritornels for string quartet & tape
Songs of Innocence & Experience is the fourth work of Zimmermann’s Werkgruppe 21 : Ritornell, and indeed the Songs are themselves ritornellos. Here “childhood” is not just a nostalgic and sentimental recollection, but a complex construction. Recordings of German children’s songs well as Allen Ginsberg's interpretation of Blake's "The Tyger" are interwoven into the abstract music of the string quartet.
Zimmermann writes

Songs of Innocence & Experience is a composition with twenty ritornellos after William Blake's cycle of poems Songs of Innocence. The spirit of each poem is condensed and projected onto children's songs, which I recorded on the streets of Nuremberg twenty years ago. I transcribed these songs with all their inaccuracies of intonation and with all their repeated phrases which are part of the recollection and forgetting of the melodies. I remembered how, many years ago, I drove through the United States and picked up a hitchhiker who had with him a cassette of Allen Ginsberg's interpretation of Blake’s “The Tyger” and other poems. The raw energy of Ginsberg's vocals lingered and is now accompanied by the string quartet in the concluding ritornel “The Tyger”. Then I learned that the son of David Harrington (the first violinist of the Kronos Quartet) had died suddenly while father and son were walking on a Sunday on Mount Diablo south of San Francisco. The last two ritornellos were written in remembrance of that loss. The soul of a child is the most fragile in this crude world. The older one gets, the more important it is to preserve it as a measure against alienation.

http://renewablemusic.blogspot.co.uk/
The blog of the composer Daniel Wolf with interesting comments on Zimmermann.
Posted by Keri at 16:25